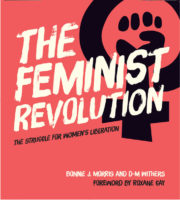 The Feminist Revolution: The Struggle for Women’s Liberation offers a panoramic view of women’s fight for equal rights during the late twentieth century, as it’s never been presented before. Informed by a wealth of original interviews and previously unpublished accounts, the world of women’s liberation movements is illustrated with rare and stunning images that show the creativity and diversity of feminist struggles. This is a timely and brilliant tribute to the audacious spirit of women’s liberation movements, which offers renewed inspiration for the future.

BONNIE J. MORRIS was a professor at both George Washington University and Georgetown, and now teaches women’s history at Berkeley and Stanford.  She is the author of fifteen books and lectures widely on the women’s music movement.

Cetirizine; Pseudoephedrine: (Moderate) Caution and close observation should be used when albuterol is used concurrently with other adrenergic sympathomimetics, administered by any route, to avoid potential for increased cardiovascular effects. Ceftin injection is sometimes given just before a surgery to prevent infection. Store at room temperature away from moisture, heat, or cold temperatures http://italia-farmacia.com/. A small proportion of aldophosphamide freely diffuses into cells, where it is decomposed into two compounds, phosphoramide mustard and acrolein.

DR. DEBORAH M. WITHERS is one of the UK’s most respected proponents of women’s cultural history. D-M has curated numerous major exhibitions on the women’s movement, including the leading Sistershow Revisited and Music & Liberation, and has written widely  on the subject. A past lecturer at Bristol University, D-M is now Research Fellow at the University of Sussex/British Library, working on the Virago papers.

Richly illustrated, engagingly written history of second-wave feminism and successor movements from the 1960s to the present. [. . .] Essential for students of women’s rights and popular political movements in the modern era and an inspiration for future actions.

Much like a museum exhibition, this collection uses accessible text and rich visual materials that invite readers to explore in a nonlinear fashion. It will appeal to both those deeply familiar with the topic as well as beginners of this influential moment in feminist history.

Morris (gender and women’s studies, Berkeley) and Withers (fellow, Univ. of Sussex, UK) provide a thematic history of the women’s movement in a text that is part visual anthology and part textbook. Despite largely focusing on feminist manifestations in the US and Britain, the authors take pains to incorporate international sources and events, most significantly through their inclusion of an array of visual sources—such as stamps, posters, flyers, and buttons—from countries including South Africa, Russia, China, Australia, Greece, and Belgium. The authors begin by discussing the movement and how it was mobilized, the movement’s political and ideological commitments, and feminism’s strong ties to the Civil Rights Movement and activism by women-of-color. Next, the authors tackle women’s reclamation of the physical and mental treatment of the body, sexuality and lesbian feminism, culture and the workplace, publishing and media, music and the arts, and the antiwar and antinuclear proliferation debates. They close with a discussion of the radicalization and fragmentation of the movement and the implications for the education of the next generation of feminists. Including a foreword by Roxane Gay, this text provides an excellent and engaging introduction to the feminist movement.

Rights sold
US and Canada, UK and Commonwealth, French