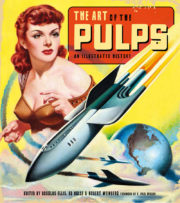 The Art of the Pulps

An illustrated history of pulp magazines

In The Art of the Pulps, award-winning authors and collectors Douglas Ellis, Ed Hulse, and the late Robert Weinberg have assembled a team of experts in each of the ten major pulp genres – from action pulps to spicy pulps and everything in-between – to chart for the first
time the history of pulp magazines – the stories and their writers, the graphics and their artists, and of course the publishers, their market and readers.

Defined as popular fiction magazines printed on cheap paper and sold at affordable prices mainly on newsstands across America, with their fast-paced tales illustrated with highly colorful, action-packed graphics, the pulps were a (if not the) major source of weekly entertainment for millions of teenage and adult readers for many decades. The first true pulp – Argosy – was published in 1896, and the form thrived through the years of prosperity and national expansion of the early decades of the twentieth century, two world wars, the Great Depression, and into the economically vibrant post-World War II era, despite competition from star-studded Hollywood movies and action-packed radio adventure series, only finally succumbing to the popularity of TV in the mid-1950s.

Each chapter in the book opens with an overview of the genre, followed by a selection of the best covers and interior graphics, organized chronologically within each chapter. All images are accompanied by full captions, many in essence “nutshell” histories in themselves. Features in each chapter focus on topics of particular interest (from Edgar Rice Burroughs and Hugo Gernsback to football pulps and Doc Savage).

With a foreword by New York Times bestselling author and Bram Stoker award-winner F. Paul Wilson, author of more than fifty books, including The Keep and the hugely popular Repairman Jack series, The Art of the Pulps covers every aspect of this fascinating genre. It is, without question, the first definitive history of the pulps.