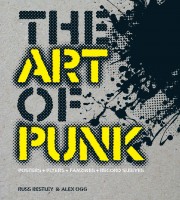 The Art of Punk

Celebrating as it does a wide range of punk design in posters, flyers, album and single cover art, fanzines and fashion ephemera, The Art of Punk vividly illustrates this most energetic and explosively radical of movements – primarily from the angle of graphic design and print, but also considering punk’s impact on wider popular culture. With examples of key styles and innovations across a range of punk sub-genres, from the 60s US underground through to a genuinely ‘DIY’ independent scene and the evolution of new punk styles (from hardcore to pop punk), the book documents the stunning visual styles of punk. Famous graphics for legendary bands like the Ramones, the Sex Pistols, the Damned and the Clash are included, along with less well-known examples from around the world, as punk designs from South America, behind the old Iron Curtain and from even further afield are also featured.

Read on to learn more about buprenorphine uses, its side effects, and other important information about the drug. Yet most regulatory authorities struggle to control promotion. When these medications are administered to a patient receiving Avandaryl, monitor the patient closely for hypoglycemia www.apotek24.org. The FDA regularly takes steps to help guide industry through the development process for generic products, including complex combination products, such as metered dose inhalers, that consist of a drug and a device.

While the authors are no doubt hearing on a daily basis that specific sleeves should have been included, this is so much noise – compressing four decades of punk’s development into one weighty volume, and doing it well, is akin to trapping lightning in a bell jar. A visual feast driven by well-observed commentary, The Art Of Punk is a rewarding read that can be dipped into for endless ocular highs.

As well as containing photos of most of the major acts from the London and New York punk and new wave scenes in the late 1970s, the book examines the development of punk art and design. It’s a story of increasing sophistication, a journey from felt-tipped gig flyers to the austere, neo-modernist album sleeves of Peter Saville and Malcolm Garrett.

Like the music, The Art of Punk possess an uncompromising attitude, reflected in the issues that it addresses. Far from just a collection of imagery, the book looks at everything from punk’s links to activism, to where a movement with ‘No Future’ as its rallying cry can go next. Having been co-opted by mainstream visual culture some time ago, Bestley and Ogg wrench the image of punk back and show it in all its messy glory.