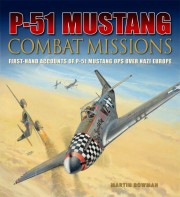 Like the other four titles in the bestselling ‘Combat Missions’ series, P-51 Combat Missions features some 75 first-hand accounts from Mustang pilots and support staff, showing what it was like to fly – and fight – over Nazi-occupied Europe in World War II. Accounts from aces, wingmen, bomber escort crew (including the famed Tuskegee Airmen) and more are illustrated with more than 200 stunning archive photos, together with some 100 items of memorabilia. The book begins with a unique ‘walkaround’ section that – by means of full-colour detail and air-to-air photos – takes the reader on a tour of the key Mustang marques, while Part 3 describes (again, with first-person stories) how these hard-fighting heroes of the air relaxed on their all-too-brief R&R breaks. There have been many books on this most famed airplane, but P-51 Combat Missions, written by acclaimed aviation author Martin Bowman, is surely unique in the way it evokes the daily life of the men who risked their lives in the cause of freedom in the skies over Nazi-occupied Europe.